ELVIS A HIT AT THE HART CENTRE

POPULAR ARTIST DRAWS IN THE CROWDS

WOULD MORE LIVE ENTERTAINMENT DRAW YOU INTO FLEET?

Saturday 11th January saw the return of Elvis to the Hart Centre as he was back by popular demand after his successful show at the Fleet Christmas Festivities. Dave Hurrell, (also known by his stage name Dale Fontaine) put on a mammoth show from 11am – 4pm in the Cafe Giardino site to the delight of shoppers, who danced, sang and enjoyed the upbeat atmosphere.

Below: Elvis, back by popular demand!

All of Dave’s shows are non-profit and are done purely for charity. This time round he was collecting for Frimley Park Hospital’s colorectal department, as they helped him greatly when he was very poorly. People seemed more than happy to chip in for such a good cause and the sound of singing was accompanied by the sound of money being thrown into the collection area.

It’s not too late if you’d like to donate to this great cause, just visit Dave and Dee’s Just Giving Page.

Below: The show was held to raise funds for Frimley Park Hospital Colorectal Department.

Below: Video of Dave singing ‘Pledging My Love’. 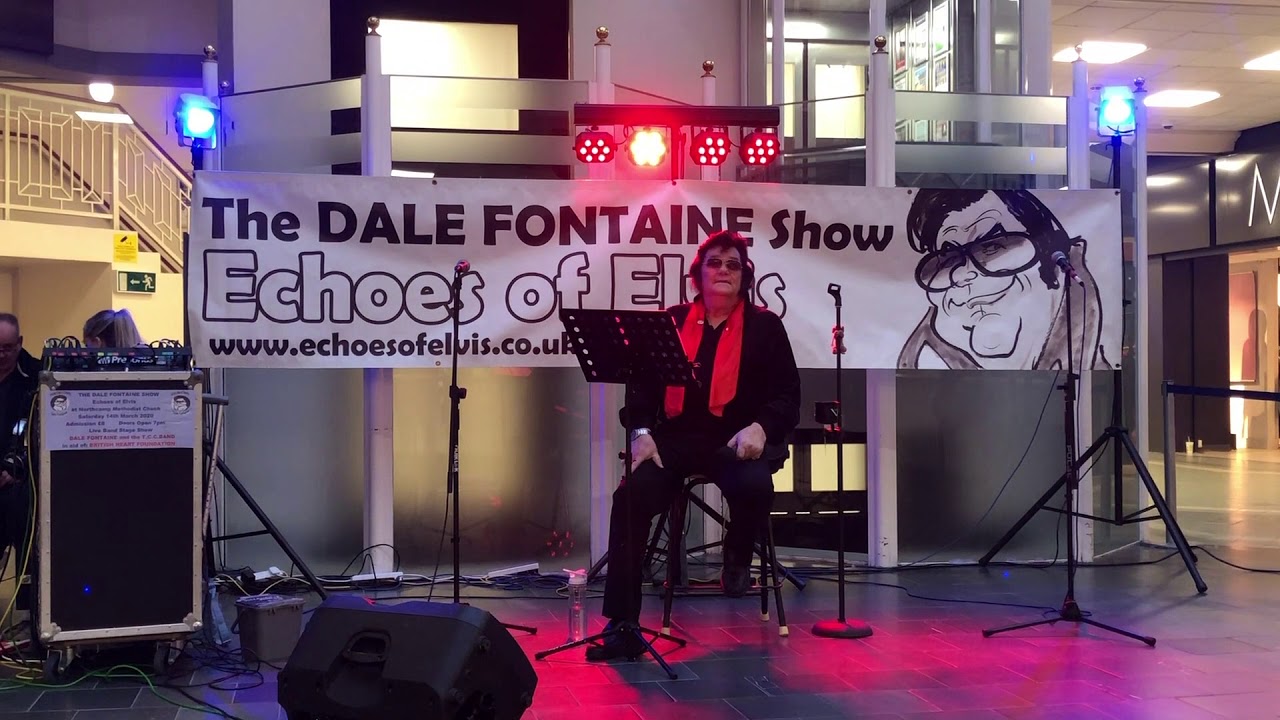 Below: Our Elvis singing ‘Steamroller Blues’. 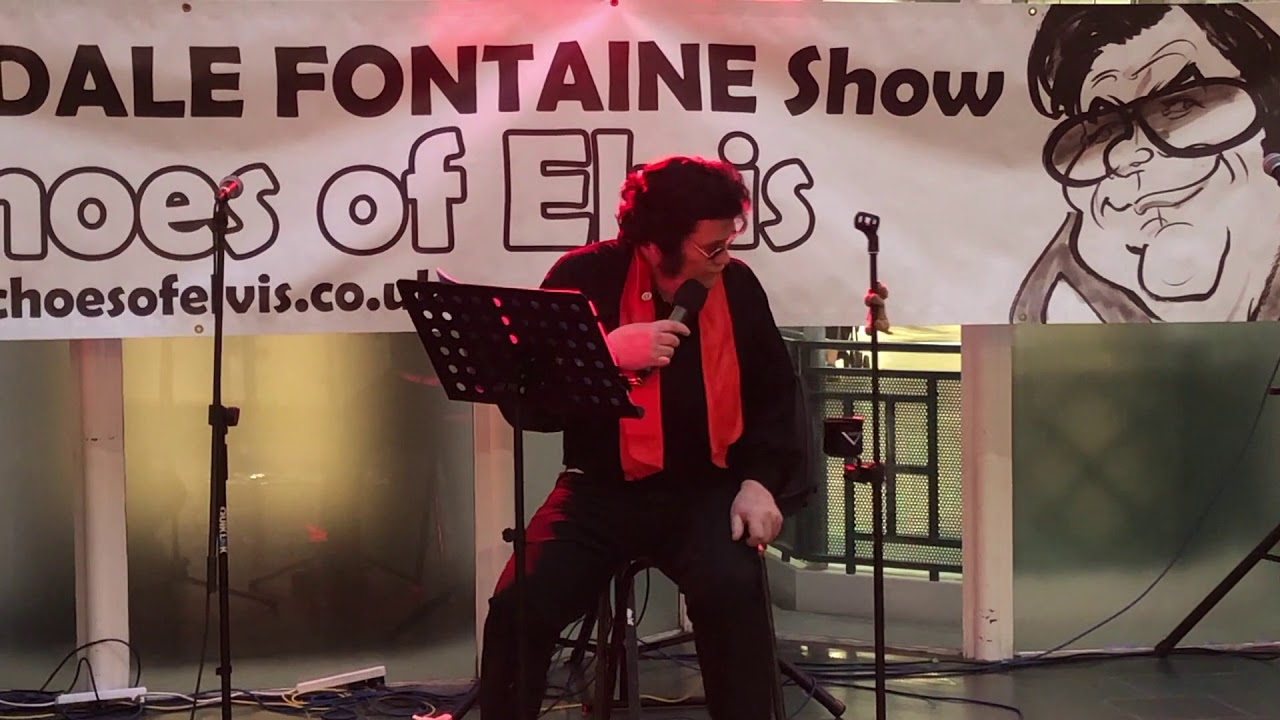 Dave and his wife Dee never seem to stop and already have a packed out year of gigs planned around the local area, all supporting a range of different good causes. In fact they have just hit £1000 raised from donations alone for the past year, so a huge congratulations and thank you to Dave, Dee, their band and all that have supported them, including the Hart Centre for offering such a great stage area for the show – twice!

Below: Elvis entertains Fleet in the Hart Centre.

The show was a great way to chase away the January blues and it was wonderful to see so many smiles on so many faces. Whether just passing by, stopping for a listen or even a quick dance and singalong, it added an atmosphere to the centre that gave it a much needed boost and yet again proved that people really enjoyed listening to the music while they shopped.

Below: A real classic, Elvis sings ‘Always On My Mind’. 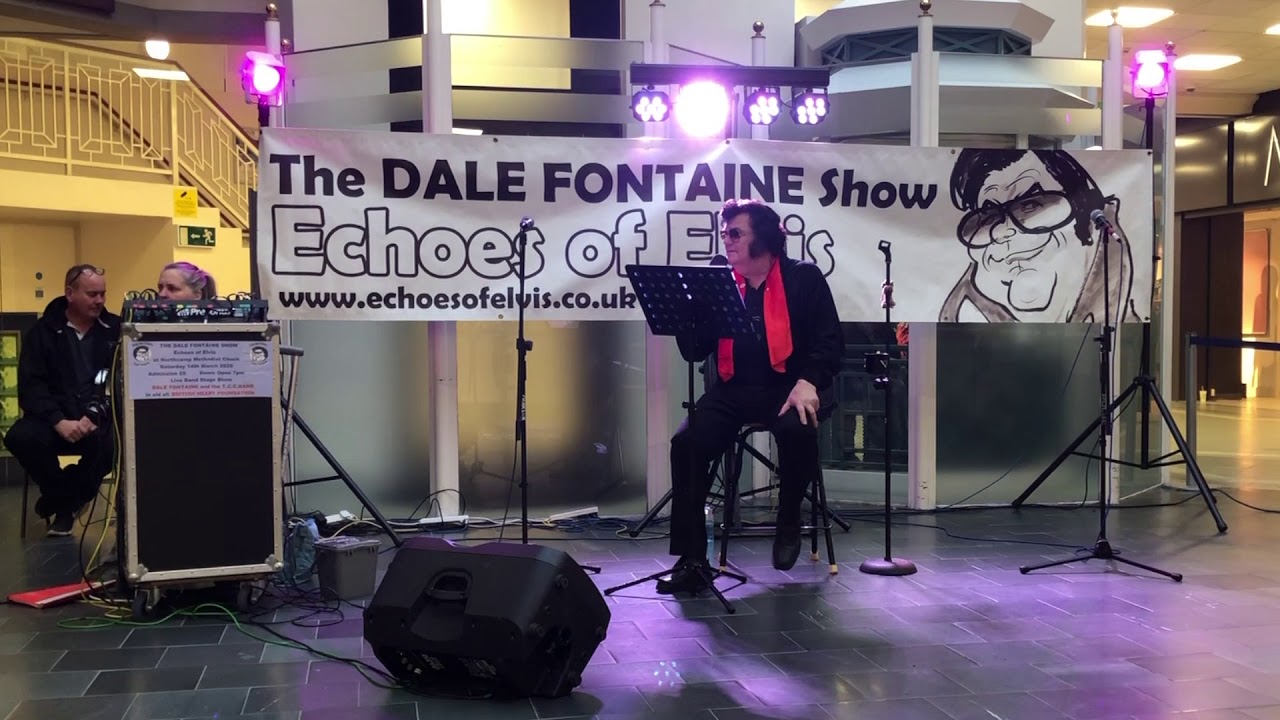 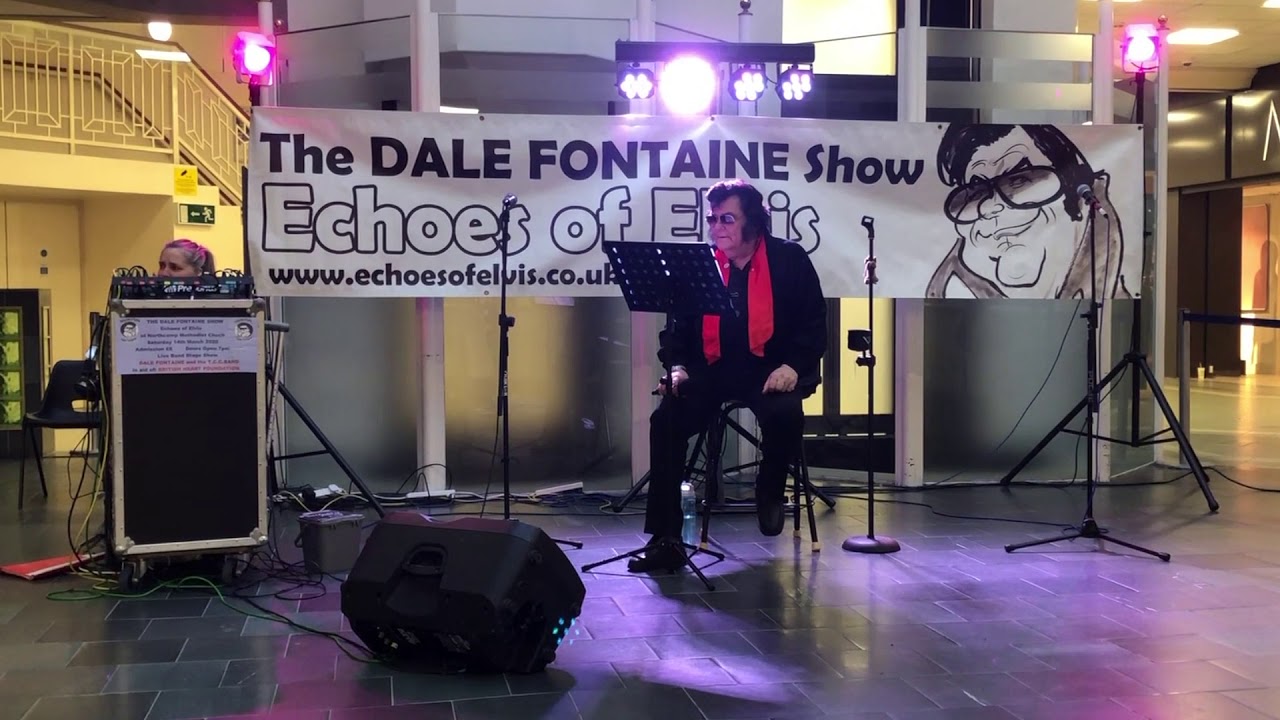 Fleet is often compared with other local towns when it comes to content and atmosphere and having been to Camberley many times when they have their live music performances in their outdoor pedestrianised area, it truly transforms a dull shopping experience into a much more enjoyable day out, encouraging people to stick around rather than rush off…so could this help our ailing high street?

A public stage area in the town could be offered out to any number of local performers, charities, schools or anyone else who would like to liven up the atmosphere of Fleet and promote themselves with a song, show or even a joke or two, so would it encourage you to visit the town more to shop or hang out in? Sadly the old cafe site still has plans for a new tenant this year, so it may be the last show the Hart Centre sees…and while some will welcome the addition of a climbing activity area, others might argue that a permanent stage area would have offered the opportunity to inject a spark of life and variety back into the area.

Below: Elvis keeps on rocking with ‘Blueberry Hill’. 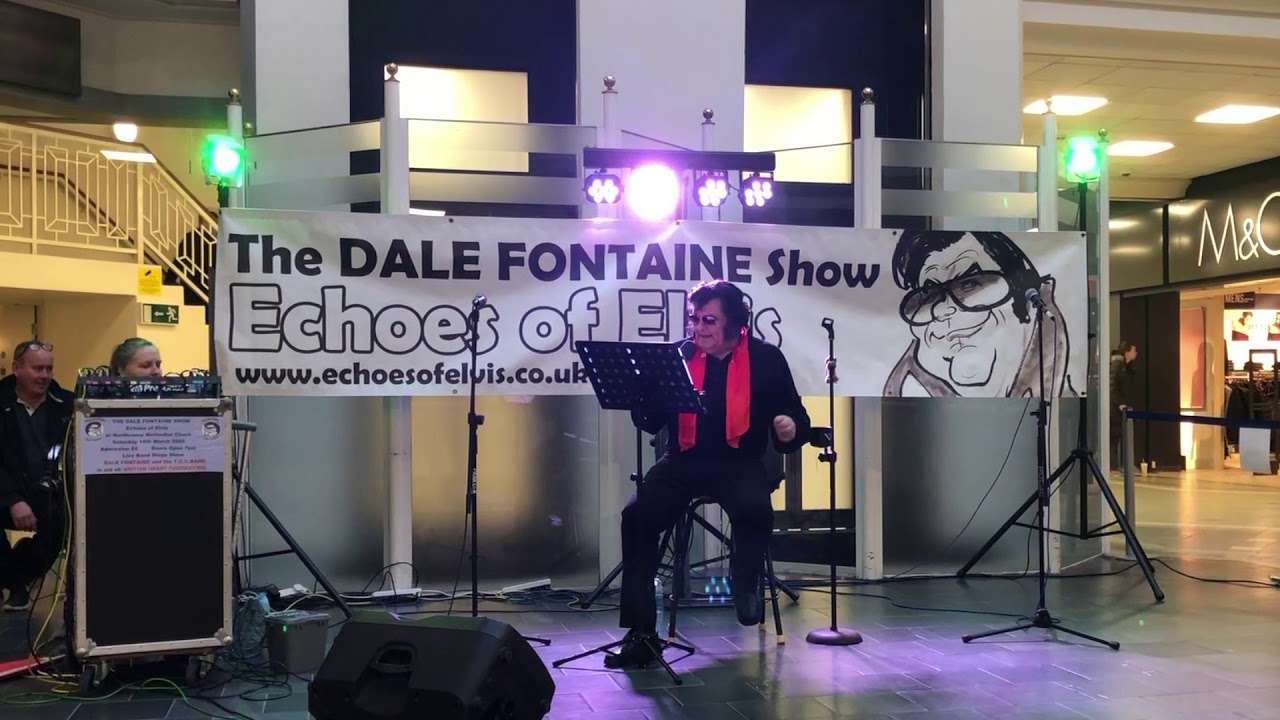 Now Dave is used to requests for photos and autographs at his shows but this was a first for him as he was asked (very enthusiastically!) to sign an aubergine…yup, I did say an aubergine! Only in Fleet eh!

Below: Autographing an aubergine…yes, really.

Below: Great to see people stopping by, enjoying the music and contributing to the charity collection!

Below: Dave brings an end to the mammoth 5 hour long show by singing ‘The American Trilogy’ and ‘Can’t Help Falling in Love’. 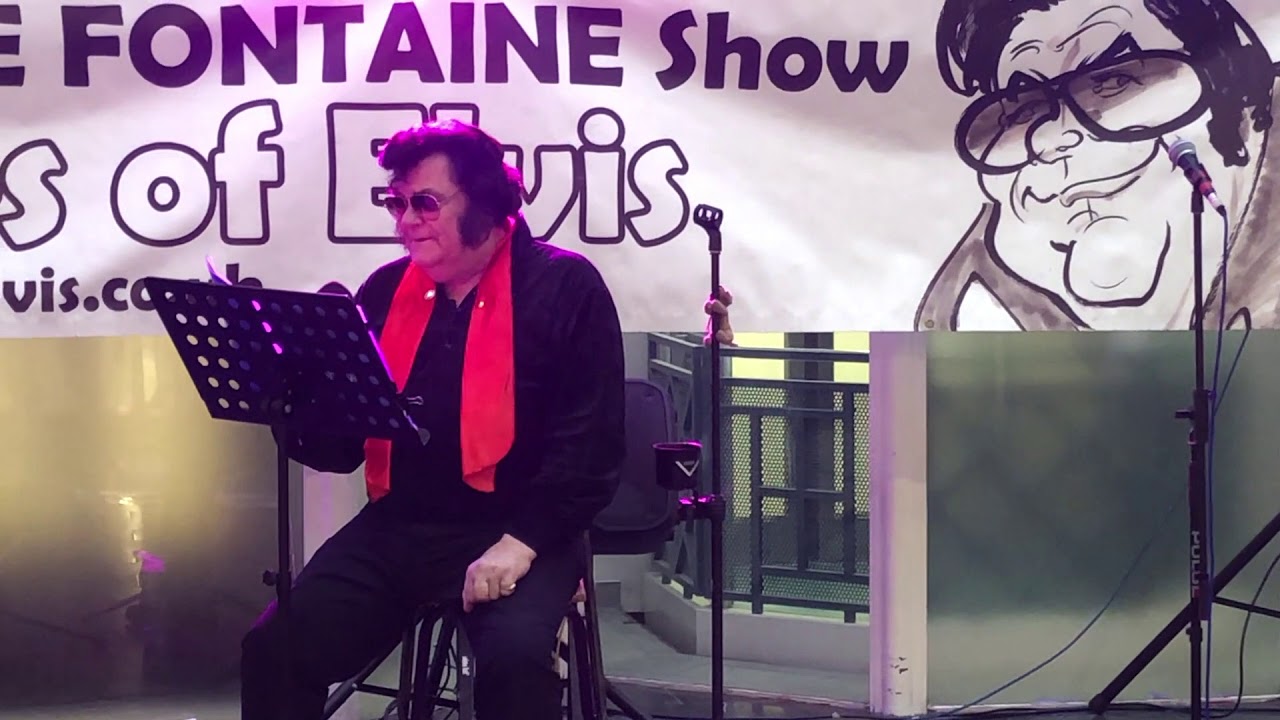 If you’d like to see more of Elvis and his band then you can visit his Facebook page. His next performance is at North Camp Methodist Church on March 14th and this time they will be raising money for The British Heart Foundation, which they will hand in to the Fleet branch of the shop.

It looks like that’s all from Elvis and the Hart Centre, so we’ll leave you with Dave’s parting words and hope you get to see and enjoy his future shows.

Without a song, a man ain’t got a friend,

Without a song, the road would never bend,

Without a song, the day would never end,

So, I just keep singing the songs.

HERON ON THE LAKE – HISTORY OF FLEET HAMPSHIRE

THE ONGOING SAGA OF THE REDFIELDS LANE ROUNDABOUT

HOMES FOR UKRAINE – RESOURCES AND HELP

SO WHAT IS HAPPENING TO THE IZZY BUILDING...

AFTER BAKERS…IS THERE A NEW DIY STORE IN...